Here are some new and unique hand cut Silhouette sets
you can find in my Etsy Shop on the side bar. 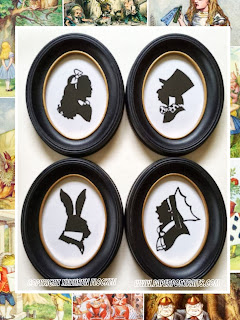 Lewis Carroll inspired Alice in Wonderland original Silhouette
set by Silhouette Artist Kathryn Flocken.
Buy the complete set of four, or you can get just a few if you prefer! 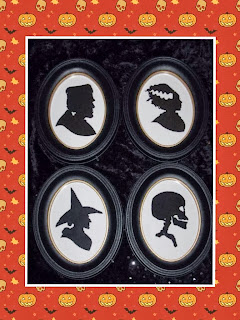 Hand cut original Silhouette of Girl With a Pearl Earring by Silhouette Artist Kathryn Flocken.
Inspired by Dutch painter Vermeers' Masterpiece (seen on the far left).
Available in color, or black and white. 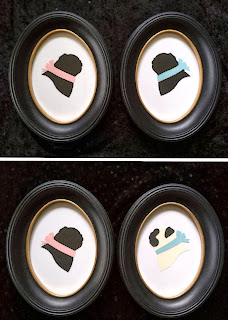 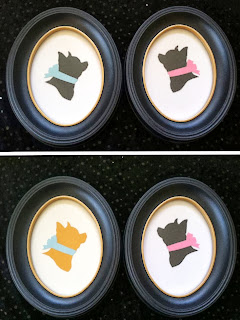 Posted by Silhouettes by Kathryn at 10:48 AM No comments: 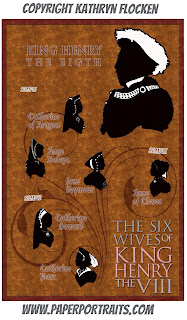 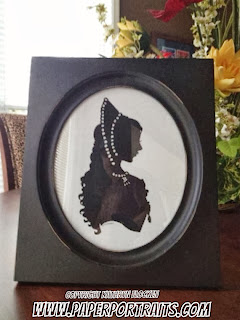 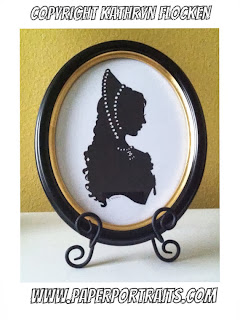 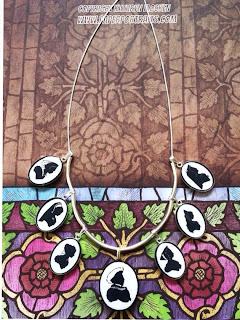 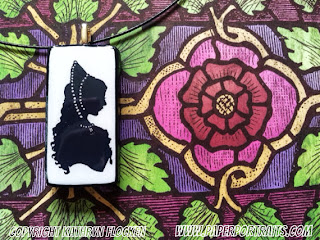 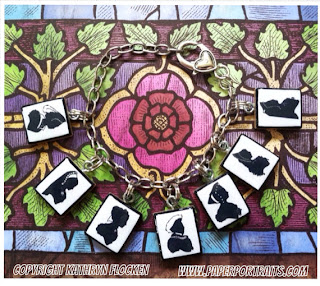 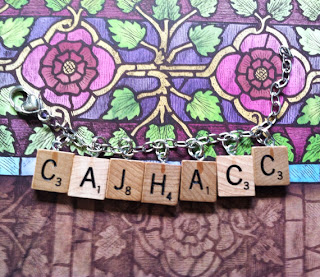 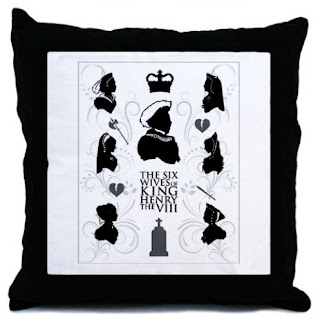 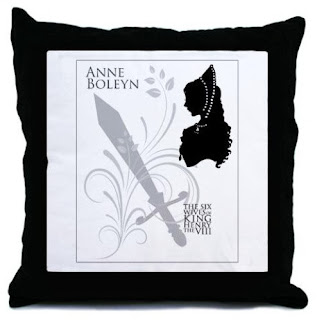 Tudor decorative throw pillows.
Your choice of Tudor Queen, or the entire group! 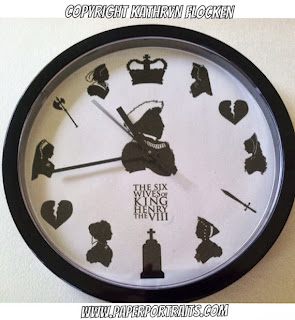 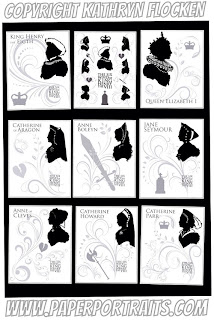 Tudor Original Silhouette series Stationery, set of 9 cards with envelopes.
Find all items in the PaperPortraits
Etsy shop on the side bar!


The Six Wives of King Henry VIII as they have NEVER been seen before!
Until now, this famous group of historical figures have only been depicted in 3/4 or front facing portraits...many of which were flattering exaggerations done by Artists of the court, or drawn later from the verbal descriptions left in historical records.
This original series of Tudor Silhouette profiles was created through the research and imagination of Silhouette Artist Kathryn Flocken, and is EXCLUSIVE to this Etsy shop!
***********************
King Henry VIII is encircled by all of his wives with a symbol of their fates!

Wife #1 Catherine of Aragon (Divorced~ Broken heart)
Wife #2 Anne Boleyn (Executed~ Beheaded by sword)
Wife #3 Jane Seymour (Died~ Gravestone with cross)
Wife #4 Anne of Cleves (Divorced~ Broken Heart)
Wife #5 Catherine Howard (Executed~ Beheaded by axe)
Wife #6 Catherine Parr (Survived ~ Crown)
**************************
PLEASE HAVE A LOOK AROUND MY ETSY SHOP FOR MORE TUDOR ITEMS, CUSTOM HAND CUT SILHOUETTES MADE TO ORDER, HAND BRONZED SILHOUETTES, COPPER SILHOUETTES, HOLLOW CUT SILHOUETTES, MY CHILDREN'S BOOK AND LASER CUT WOOD JIGSAW PUZZLES!!!
PLEASE TAKE NOTE:
*****King Henry and his many Queens would have never posed for their Silhouette portraits during the time of King Henry VIII's reign in the 1500's, as the art of Silhouette cutting began roughly 200 years later in France (then the photographic portrait came about 100 years after THAT!). The portraits of those days were usually commissioned oil paintings, a luxury reserved only for royalty and those of great wealth. These are the artistic musings of what these people may have looked like in Silhouette, had the art form been around in that time period.
*****No watermarks or copyright marks will appear directly on or around the images you will receive. Images shown in this Etsy shop are medium to low resolution to preserve their uniqueness. You will receive high quality, crisp images on your items.
*****The copyright of these images is NOT transferred to the buyer of such artwork at the time of purchase. The purchase of any piece of artwork offered for sale entitles the buyer ONLY to physical possession of the artwork and the right to resell that single physical piece of artwork, but does NOT give the buyer or any one else any other rights, including the right to reproduce the artwork or to prepare derivative works from the artwork.
*****COPYRIGHT WARNING: The additional step of copyright protection HAS been taken on this Tudor Silhouette series including this specific clock design. This series has been copyrighted through the Library of Congress in Washington, D.C. Sole ownership and all rights belong exclusively to Kathryn Flocken of Paperportraits.com. All copyright infringers will be prosecuted to the full extent of the law, and monetary damages will be sought after.
Je serai aussi rapide que Rombaud, mais pas aussi doux.
Posted by Silhouettes by Kathryn at 2:51 PM No comments:

Go have a look in my Etsy Shop on the side bar for
my brand new sterling silver pendant collection!
Classy and beautiful! 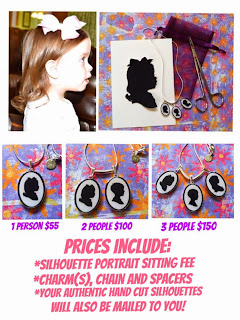