How to Distinguish a Real Peale Silhouette from a Counterfeit. 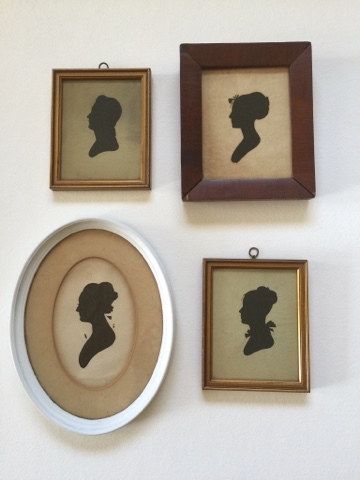 One of these things is NOT like the others!
Can YOU tell which one of these Peale Museum Silhouettes above is a fake?
(Just click on the photos to enlarge)
When the art of Silhouette cutting began in France back in the 1700's, "shade" portraits were initially cut freehand by artists. The artist would quickly and skillfully snip a likeness from paper just by looking, then the portrait was mounted on to backing paper, then framed or even placed within the pages of the family Bible.
Silhouettes were meant to capture the true countenance of the person, and were a way of keeping family records. Practical and affordable, the "poor man's portrait" crossed all boundaries of class and were embraced by all, despite income or rank in society.
In the late 1700's, "shade parties" we're a popular activity at court that anyone could participate in. The sitters shadow would be traced life sized by an amateur by candle light, then cut out. The paper profile would then be blackened with either watercolor or lampblack. 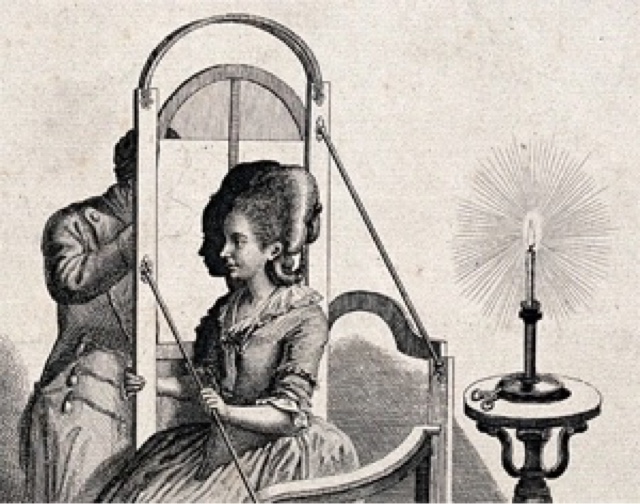 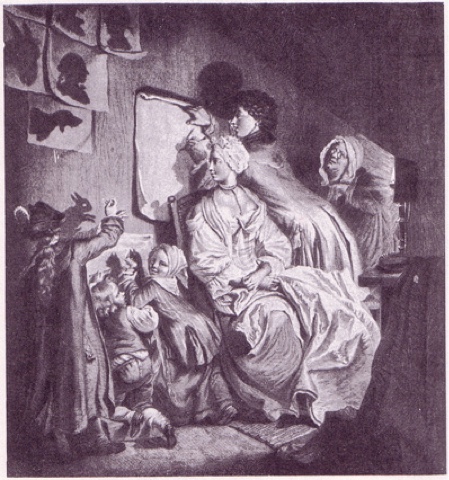 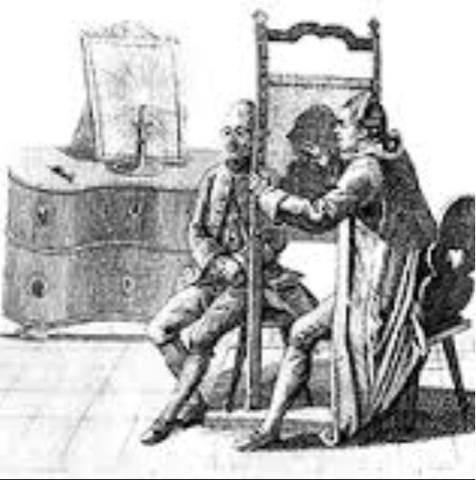 At about the same time in France, an efficient profile tracing machine was invented that combined the profile tracing screen, along with a vertically mounted pantograph. This machine was called the Physiognotrace, and was used at the Peale Museum for creating Silhouette profiles for its' visitors.

A thin metal stylus was employed as the drawing tool for impressing the scaled down profile image onto the paper (see figure 3 on the pantograph). The artist would then use this imprint as their guideline to work from, and could easily modify the profile as they saw fit whilst cutting it out from the center of the paper. 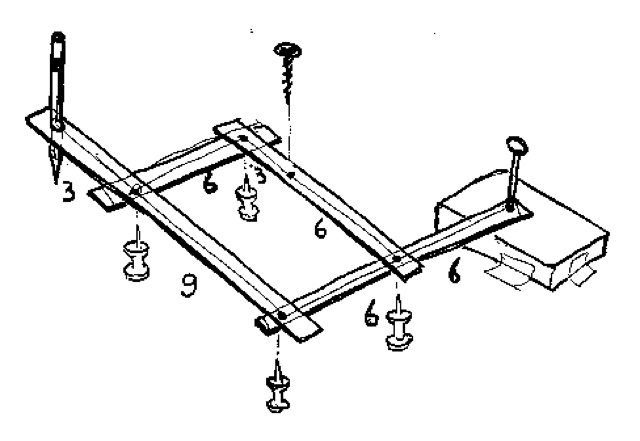 From Wikipedia:
"A pantograph (Greek roots παντ- "all, every" and γραφ- "to write", from their original use for copying writing) is a mechanical linkage connected in a manner based on parallelograms so that the movement of one pen, in tracing an image, produces identical movements in a second pen. If a line drawing is traced by the first point, an identical, enlarged, or miniaturized copy will be drawn by a pen fixed to the other. Using the same principle, different kinds of pantographs are used for other forms of duplication in areas such as sculpture, minting, engraving and milling."
Various incarnations of the physiognotrace. 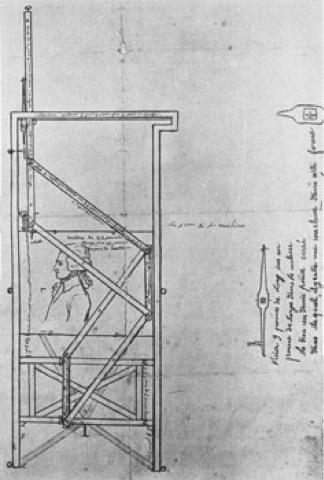 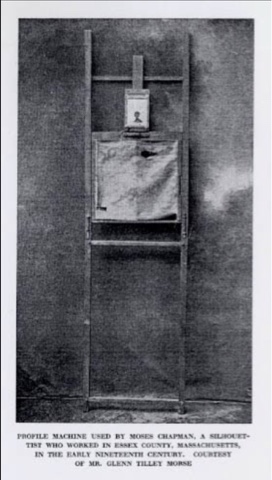 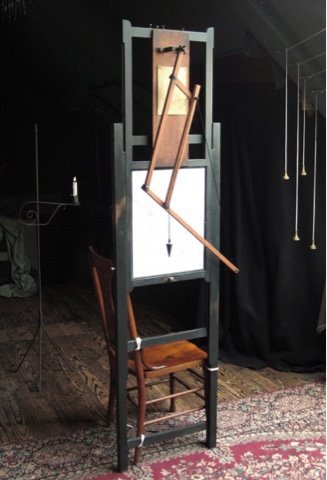 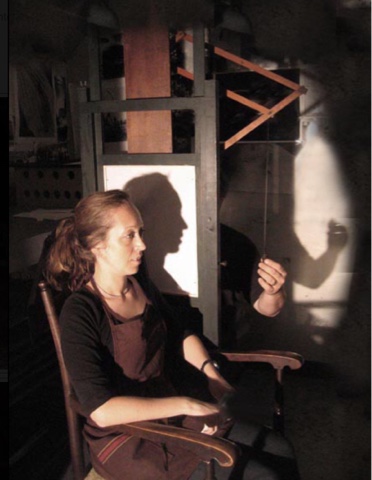 In 1802, John Isaac Hawkins, who was born in England in 1772 and who lived in Philadelphia, Pennsylvania, patented the second official physiognotrace, and partnered with Charles Willson Peale to market it to prospective buyers. John Hawkins's machine differed from Chrétien's in that it traced around the actual face with a small bar connected to a pantograph that reduced the silhouette to less than 2 inches. At that time, many versions of these instruments were being used all over the East Coast in the United States, some of which predated Hawkins's, and which were capable of quickly making machine-made profiles.

By 1802, in response to the popularity of silhouettes, which were invented in the late eighteenth century, Peale introduced the British inventor John Hawkins’s (1772–1855) physiognotrace at his museum in Philadelphia. While the operator traced the sitter’s head, the mechanism impressed the image onto a piece of paper that was often folded to produce multiple portraits. The operator then cut away the center of the paper, leaving a “hollow cut” image. These silhouettes, or profiles as they were also called, could be kept loose, framed, or compiled in albums; a black or blue piece of paper or fabric placed behind the image provided contrast. 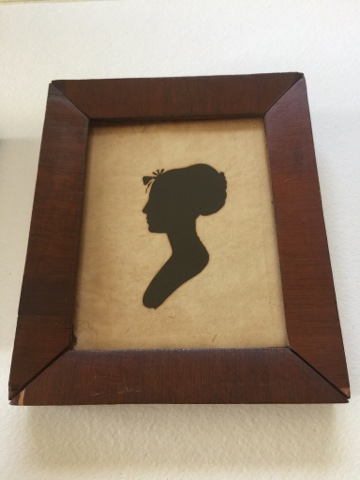 A fine example of a Peale Museum "hollow cut" Silhouette embossed with the MUSEUM stamp. 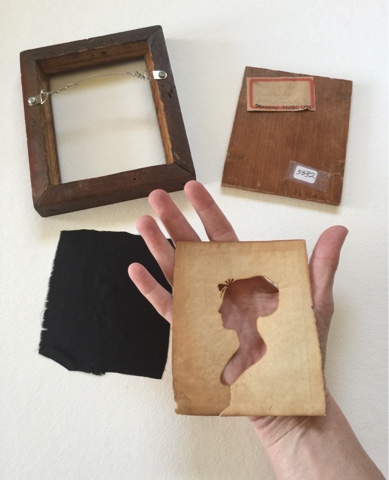 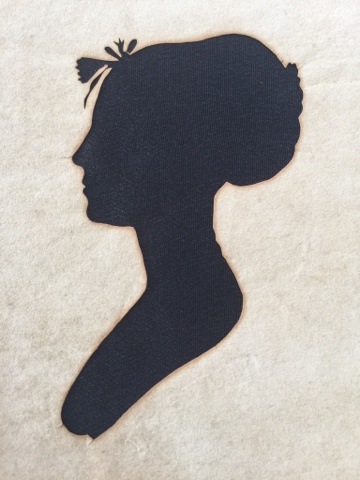 The MUSEUM stamp is faint, but can be seen if you enlarge the photo and look closely. 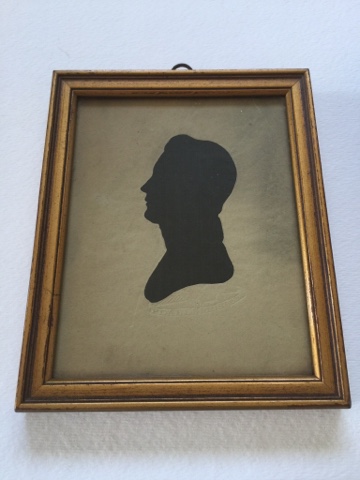 This dapper fellow cut at the Peale Museum is a TRUE GEM for several reasons! 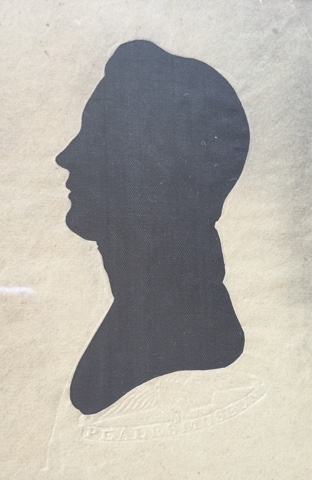 The PEALE'S MUSEUM eagle stamp is rare, and the imprint left on this particular hollow cut can be seen quite clearly. The eagle stamp is also placed correctly, just under the cameo, with no space in between the bust and the stamp. 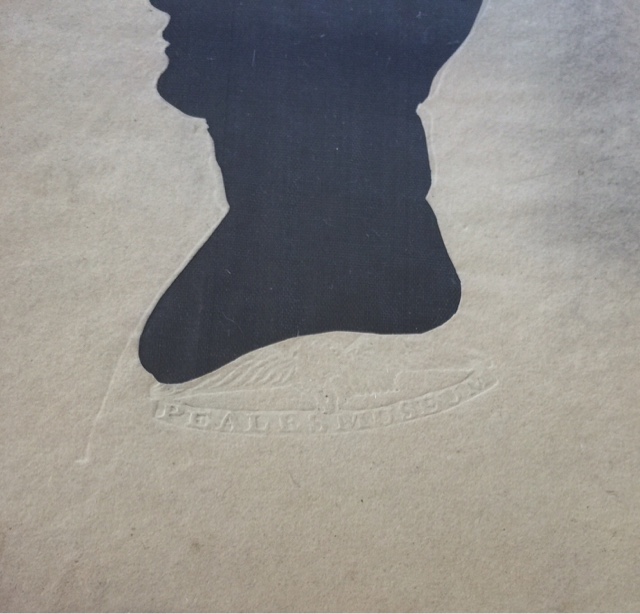 The other detail that makes this Peale Museum hollow cut most desirable, are the many stylus marks seen around nearly the entire head! 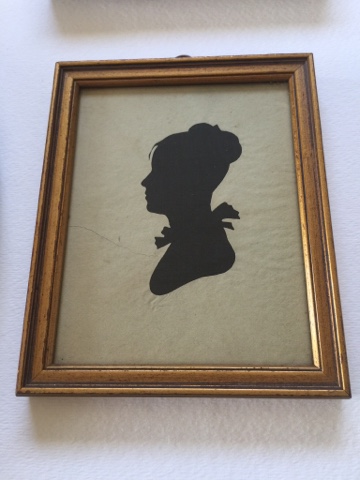 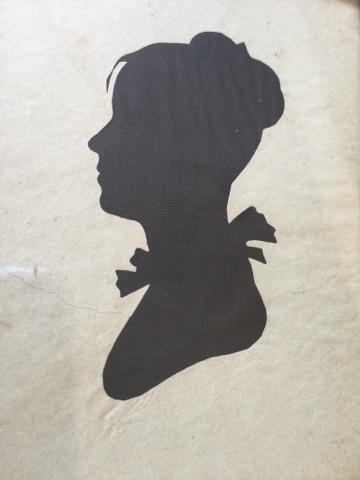 Her eagle stamp is a little more faint, but still can be seen with close observation. 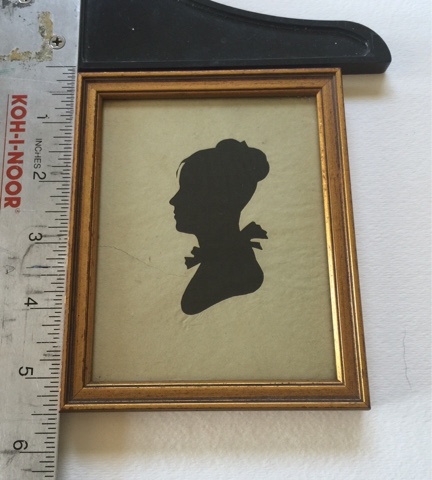 Size matters! When looking for a genuine Peale Museum Silhouette to add to your collection, be sure to measure it to see if it fits in the correct parameters. 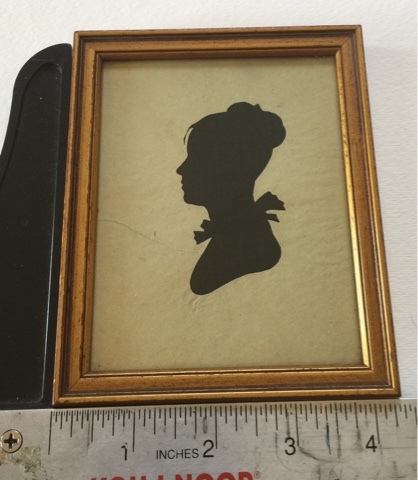 The real silhouettes done at Peale’s museums are rectangular and are usually cut from about 4 3/4-by-3 1/2 inch paper; the fakes are typically 8 by 6 inches. 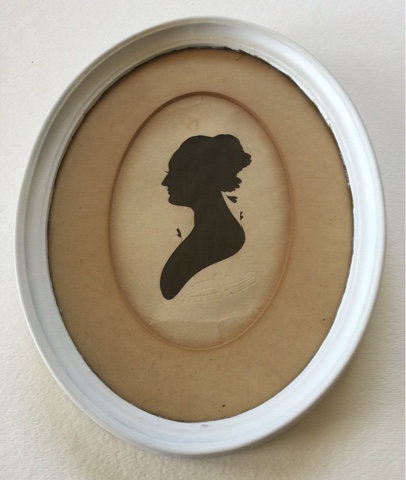 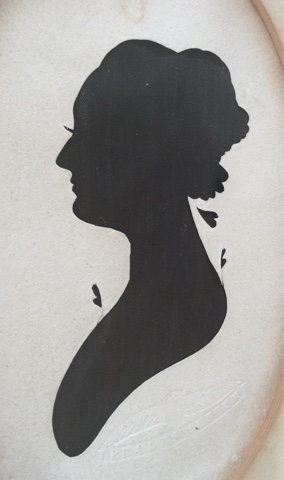 This is a FAKE Peale. The giveaways?
Larger and bulkier silhouette, the subject is Martha Washington, and the eagle stamp sits well below the bottom of bust instead of directly along it. 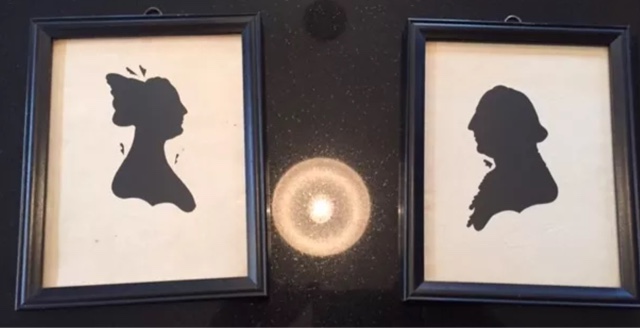 Fake Peale Museum Silhouettes are easy to spot once you know what to look for!

The most faked silhouettes in the world have the impressed signature "PEALE'S MUSEUM" under a spread eagle.  That is because, in the early 20th century, a couple of unscrupulous antiques dealers named Collins found the original stamp.  They set about making horribly cut fakes and stamping them with what had been one of the most rare of stamps from Charles Willson Peale's Museum.  The fakes are easy to spot (although they come up for sale all the time as original pieces).  First, the silhouette cutting is sloppy and the subjects are quite often George Washington and other great statespersons.  Second, the paper used by Peale's real tracing machine was 3 1/2" x 4 3/4".  The size of Peale's paper could not vary because his tracing machine was set up to hold a 3 1/2" x 4 3/4" piece of paper and automatically reduce the size of the profile while it was being traced around the actual person.  The fake silhouettes are on paper that tends to be 6" x 8"....it is impossible that this size paper was used in Peale's tracing machine.  Last, the impressed signature stamp for the real silhouettes sits right below the bust line termination....it had to because the paper was not much bigger than the actual cut profile.  The impressed stamp on the fake Peale's sits well below the bust line termination....in an apparent effort to even out the extra expanse of blank space created by such a large piece of paper (even though the figures were cut much larger than the real Peales).  The fake Peale's Museum silhouettes are very  predominant in the market while the real ones are quite scarce.

Silhouettist Bios page http://peggymcclard.com/justforfun/silhouettist_bios.asp?action=view&aid=1.  (Click, then scroll down to the information on Peale).

These Silhouettes are all from the private collection of Kathryn Flocken. Please visit www.PaperPortraits.com and send an email to Kathryn if you would like to borrow any of these photos or information for educational purposes

Posted by Silhouettes by Kathryn at 7:31 PM

Email ThisBlogThis!Share to TwitterShare to FacebookShare to Pinterest
Labels: antique, counterfeit, how to tell, Peale Museum Silhouettes, real or fake